Recently, road fatalities in Japan tends to decrease every year but the number of traffic accidents is still in a high number. Especially, accidents involving pedestrians and bicycles becomes dominant in recent years. To deal with traffic safety problems stated above, a number of active safety technologies have been developed and commercialized in automobiles. The functionalities of the systems include the assistance in recognizing hazards on roadway e.g. forward vehicles, obstacles, pedestrians or bicycles, as well as intervention by autonomous braking to avoid the collision when the situation becomes critical.

This research conducts the driving data analysis in near-miss incident situations, focusing on the data relevant to pedestrians and cyclists. The test scenarios based on the near-miss incident analysis are reconstructed on the driving simulator. Based on this method, active safety systems for pedestrian/cyclist protection can be tested in controlled environments with high repeatability. The algorithms of the collision avoidance systems can be studied based on the driving simulator study.

Moreover, this research also studies about the driver behavior modeling when approaching the non-signalized intersections where pedestrians/cyclists might dart out from. Using the continuous logging drive recorder equipped a number of vehicle sensors, the velocity planning behavior of careful experienced drivers was modeled. The reference velocity model is utilized in the design of collision avoidance braking assistance system in the test vehicle. 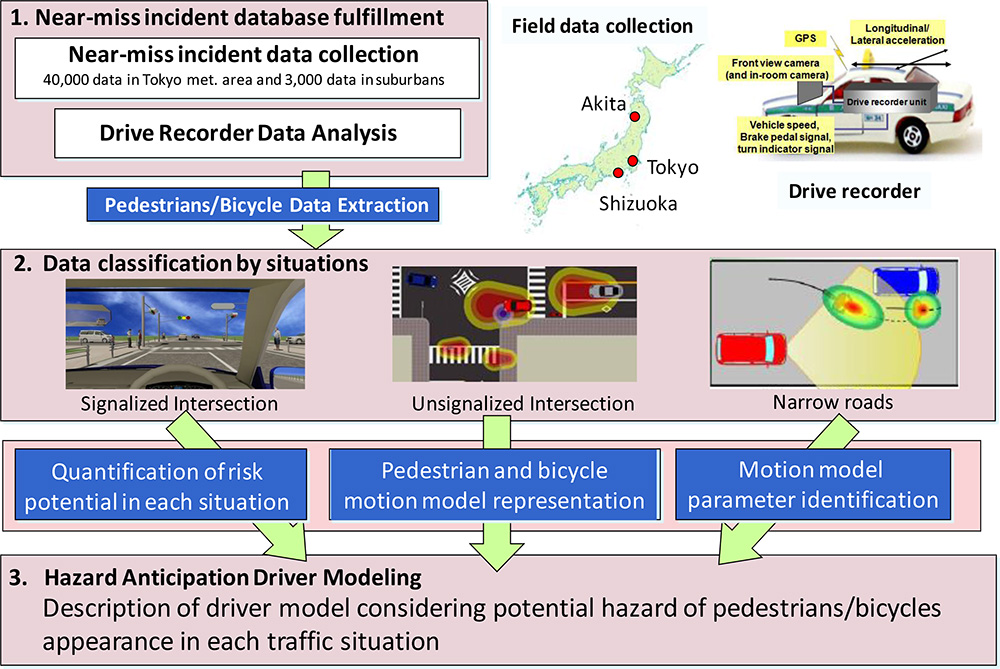 This research focuses on the intersection right-turn scenario where an object darts out from blind spot of a congested oncoming traffic at the intersection. In such scenario, due to physical friction limit, collision may not be avoided by emergency braking of a driver or an active safety function such as Autonomous Emergency Braking System (AEBS). For improving safety under the limited physical friction potential, the main objective of this research is to develop a risk predictive right-turn assistance system by predicting the potential oncoming object to reduce the vehicle velocity in advance. The blind corner can be detected by on-board sensors without requiring information from infrastructure. The intersection right-turn assistance system is developed and it is evaluated that the system effectively decelerates the ego vehicle to a safe velocity that enables to avoid conflict by AEBS in the emergency cases. 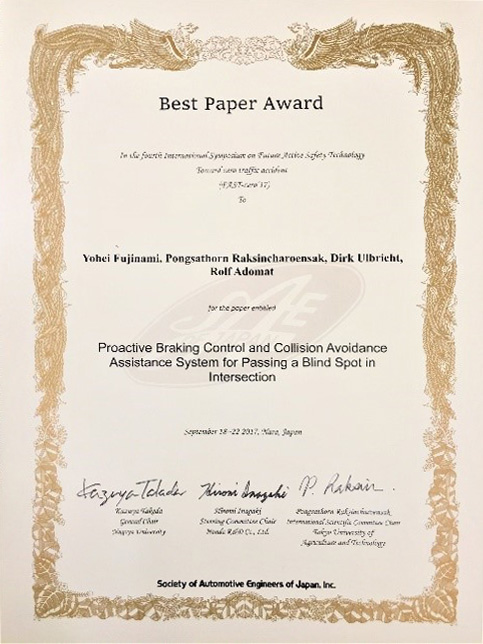