This project was adopted and had been started since fiscal year 2011 until 2019, as one of the technology innovation projects to vitalize Japan’s aging society. The project is being carried out based on a collaborative framework between academia/universities and industry, including Tokyo University of Agriculture and Technology (TUAT), the University of Tokyo, Kanagawa Institute of Technology (KAIT), the Japan Automobile Research Institute (JARI), Toyota Central R&D Labs., Inc., and Toyota Motor Corporation.

The goal of the project

By 2030, it is estimated that the ratio of the people older than 65 years will reach 1/3 and the ratio of the latter-stage elderly people older than 75 years will reach 1/5 among the populations of Japan. Focusing on the elderly drivers, it is also estimated that half of car drivers older than 60 years will be holding their driving licenses. Based on these facts, accidents involving elderly drivers have been increasing every year owing to their declined physical ability in terms of recognition and decision-making. For instance, the effective visibility range for elderly drivers is relatively narrower than that for young drivers. Based on a driving test of a forward collision warning system using a driving simulator, it was found that there are many elderly drivers who cannot recognize the collision warning sound produced by the driver assistance system. Moreover, there is a report that even when some of them recognize the collision warning system sound, they cannot brake in time to react to a critical situation. These facts indicate that in critical situations, an autonomous driving system is one of the promising solutions to prevent collisions involving elderly drivers. Moreover, degraded driving performance reduces the self-confidence of elderly drivers. Some elderly drivers still need automobiles as a means of mobility for active social participation as well as to improve their quality of life. To recover their degraded driving performance, this research project aims at considerably improving road safety by allowing autonomous driving control intervention in the last few seconds before an accident involving elderly drivers. In addition, high driver acceptance and social acceptance in introducing such assistive technology are also one of the system requirements.

The project does not aim at the driver-less vehicle technology as the project target. The autonomous driving technology which the driver is still in the control loop and has responsibility in driving is the target of the project. Moreover, when the assistance by autonomous driving technologies has the ability to take over major parts of the driving task, a dynamic balance of abilities, authority, control and responsibility between the driver and the driver assistance systems must be investigated and optimized to achieve good safety performance and acceptance.

This project aims at the significant improvement of road safety by intervention of autonomous driving control for preventing accidents in early stage before the risk becomes imminent. The autonomous driving control is designed based on the key concept of experienced driver behavior modeling with potential hazard anticipation. In this project, the driver assistance systems, so-called “Autonomous Driving Intelligence System”, in the following driving scenarios are focused on.

Moreover, the extension of autonomous driving utilizing Big Data as well as the connected vehicle technology utilizing C2X (car-to-X communication) are also included in the development platform. In such autonomous driving applications when the driver acts as a main controller and the system acts as a subordinate controller, it is important to investigate the driver acceptance in terms of shared authority concerns as well as social acceptance when introducing the autonomous system in the actual vehicle. The effectiveness in real-world driving will also be verified by conducting Field Operational Tests (FOT).

As the research plan, there are three stages of the development process as follows:

The project outcomes and social impacts are expected as social activation in countryside area, lively and active lifestyle of aged people, prevention of accidents due to degraded driving performance, global marketing of a new-type innovative active safety technology. Such outcome technology from the project is also expected to be able to improve the potential of innovation of Japan in becoming the leading country for business solution provider.

To enjoy life independently, elderly people need safe and secured transportation. Among various transportation tools, automobiles are frequently used in terms of supporting daily life.
However, elderly drivers are more likely to have accidents due to their declined physical ability. Therefore, in order to help the elderly drivers to achieve safe and secured driving, we are conducting researches and validation experiments on sensor technology, risk prediction technology, collision avoidance technology, etc. By the above researches and developments, we aim to penetrate an autonomous driving intelligence system to into the market which can ensure the safe driving by recovering degraded performances of recognition, decision-making and operation for elderly drivers and avoiding the potential accidents.

The above researches had been included in the project “Autonomous Driving Intelligence System to Enhance Safe and Secured Traffic Society for Elderly Drivers” of Strategic Promotion of Innovation Research and Development Program (S-Innovation) sponsored by Japan Science and Technology Agency (JST) from 2010 to 2020.

Motion Planning and Control Algorithm Based on Risk Potential Field

This research aims to develop an “Autonomous Driving Intelligence System” to prevent risk of accidents and enhance driving safety while keeping human drivers in the control loop. The proposed system focuses on two key technologies: Risk-predictive driving intelligence model and Shared control between the driver and the assistance system. The first key technology is to embed an experienced driver model for recovering degraded performances of recognition, decision-making and operation of drivers. In the driver assistance system design, the experienced driver model contains knowledge-based “risk-prediction mechanism” to avoid accidents in risky driving situations which the system is activated in early stage to assist safe driving when the collision risk becomes imminent. The second key point is “Shared control” using haptic interface of steering and pedal to realize good cooperative characteristics between the driver and the system by optimizing the assistance level while minimizing the interference with human driver operation.

Recently, Autonomous Emergency Braking System (AEBS) have been already introduced to the markets to realize road traffic zero fatalities, and humans positively evaluated the performance of such assistance system safety function. However, such assistance system reaches its limit when there are unexpected moving obstacles appearing suddenly from poor visibility area, such as a corner of blind intersection, and a space behind a parked vehicle. This research focuses on a parked vehicle overtaking scenario which an occluded pedestrian suddenly might intend to cross a road, and risk predictive shared deceleration control system which can assist in avoiding potential collision risk is proposed. By conducting the driving simulator experiment, we investigated its functionality and the effectiveness of the proposed pre-braking intervention support.

The near-crash events relevant to vulnerable road users can lead to serious accidents. This research proposes a potential risk estimation method for predicting the criticality of driving situations with respect to driving context and driving behavior state. Near-miss incident events were extracted to conduct human error analysis as well as cause-and?effect chain studies of accidents, and the annotation parameters that describe the driving context were investigated to find their influence on the criticality of the recorded incidents. The obtained results can be used to develop next generation ADAS or to improve algorithms for autonomous driving for increasing their safety as well as the driver acceptance. 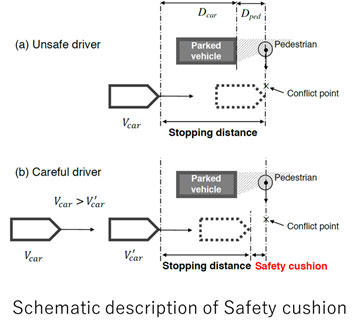